Teriyaki Sauce vs Soy Sauce & Others – Which is better, in which case? (A Complete Comparison) 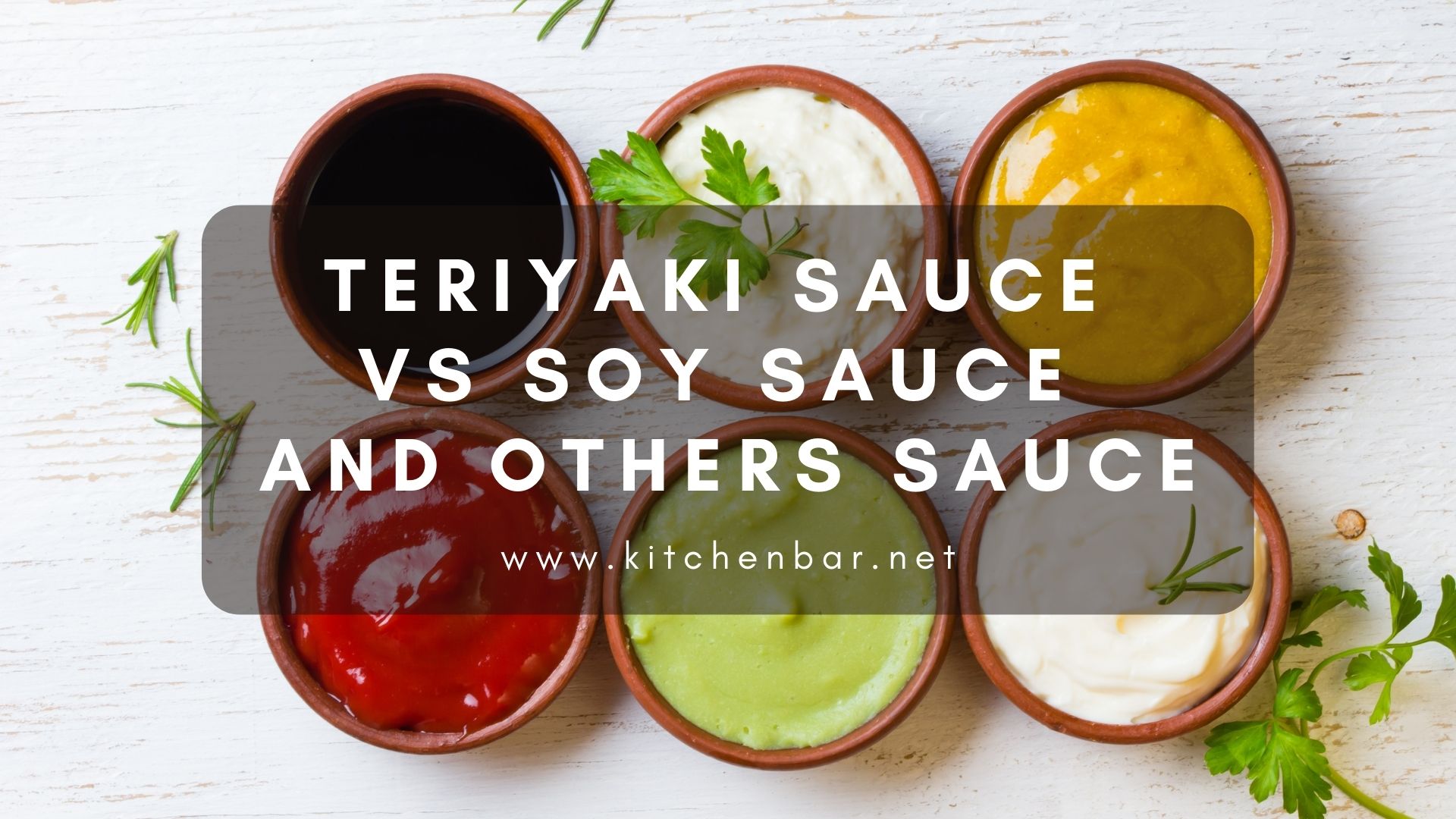 Is Teriyaki sauce the same as soy sauce (also some other sauces)? This is a question that’s often asked since teriyaki sauce tends to look pretty similar to soy sauce. They’re both dark-colored sauces and have similar flavors. Both are also frequently present in Asian cuisine. But, to answer the question, teriyaki sauce and soy sauce aren’t the same.

Comparison Teriyaki Sauce vs Others Sauce

So, what’s the difference between soy and teriyaki sauce?

Let’s take a look at soy sauce first. Soy sauce is made by fermenting crushed soybeans with wheat and salt. This fermentation process breaks down proteins in grain turning them into free amino acid. The protein fragments and starches then turn into simple sugars. The reaction within these elements is what causes soy sauce to turn a dark brown color.

It is said that the process of making soy sauce started in China as a way to extend salt. Salt used to be an expensive commodity and this was their way to stretch the use of little amounts of salt.

Teriyaki, on the other hand, originated in 17th century Japan. It is a cooking technique involving Tare, the Japanese term for seasoning. This seasoning is a blend of soy sauce, sugar, and Mirin. The seasoning is used as either a marinade, glaze, or basting sauce for broiling and grilling food. The cooking technique gives a sweet and savory flavor to meat, poultry, seafood, and vegetable recipes.

In the 1960s, teriyaki style cooking was brought to Hawaii by Japanese immigrants. The seasoning was given a local touch by adding ingredients such as pineapple, ginger, and brown sugar. This seasoning is now what we all know of as Teriyaki sauce.

This all depends on your recipe and cooking method. Technically, you can call all of them teriyaki sauces since a sauce is basically a liquid mixture used to add flavor and sometimes moisture to dishes. Teriyaki sauce can be a standalone sauce, though. You can use it as a dipping sauce, basting sauce, or a marinade.

A teriyaki marinade, however, calls for a process of cooking that involves soaking meat, seafood, poultry or vegetables for some time. These ingredients absorb the flavors from your seasoning in the process. Some teriyaki marinades can also tenderize meat if it contains certain ingredients like pineapple juice.

Both teriyaki sauce and BBQ sauce are great to use as a flavoring and tenderizing sauce for cooking meat, poultry, and seafood. The difference between the two is in the basic ingredients. Basic BBQ sauce includes ketchup, Worcestershire sauce, vinegar, spices, and sugar. Basic teriyaki sauce calls for soy sauce, sugar, and Mirin.

Both have that sweet and savory taste to them and both give that shiny glaze to food as the sugars in the sauce caramelize in the cooking process. The variety of ingredients found in the two sauces makes some differences in terms of flavor.

The barbecue cooking process benefits from both sauces, though. So Teriyaki BBQ sauce is also a thing. Teriyaki BBQ makes use of teriyaki sauce instead of BBQ sauce in barbecue-style cooking.

The term Teriyaki is actually a combination of two Japanese terms: “Teri” and “yaki”. Teri refers to the sheen given by the caramelized sugar as the tare cooks in the Yaki or grilling and broiling method of cooking. As said earlier in the article, Teriyaki sauce is more of a general term for the seasoning.

A teriyaki glaze is not too different from basic teriyaki sauce. It contains all the basic ingredients which are soy sauce, sugar, and Mirin. Since it’s meant to be a glaze, though, more of the ingredients that make for a good coating sauce are used. A glaze is often thickened by adding cornstarch, syrup, or honey to help it stick to your mains better.

Hoisin Sauce is another Asian concoction that Teriyaki sauce is usually mistaken for. Hoisin Sauce is also dark brown in color but it has more of a reddish hue to it. Teriyaki Sauce and Hoisin Sauce can both be used as a glaze, dipping, and stir-fry sauce.

However, the flavors are completely different. Like Teriyaki Sauce, Hoisin comes in different variants depending on the use and flavor preference. Most Hoisin sauces are made with a blend of fermented soybean paste, fennel, red chili peppers, sugar, and garlic. Some recipes include peanut sauce and molasses in the recipe. It is also a sweet and savory seasoning but it tends to have more of an intense flavor versus Teriyaki Sauce.

Our next sauce has quite similar flavors to Teriyaki Sauce. Oyster sauce is made from oyster extract. This may sound icky but the sauce doesn’t have a fishy flavor at all. The oyster extract is caramelized with salt, soy sauce, and sugar so it actually has more of an earthy, salty, and slightly sweet taste to it. The sauce is often thickened with cornstarch so it’s easier to use for stir-fries and as a rich dipping sauce.

Similar to teriyaki sauce, tonkatsu sauce is a tasty dipping sauce. Tonkatsu sauce is meant to go with tonkatsu, a deep-fried breaded pork cutlet. This is a traditional dish from Japan that’s served with rice and a side of salad.

Tonkatsu sauce tastes pretty similar to Worcestershire sauce that’s why some people call it Japanese Worcestershire sauce. It also looks a lot like teriyaki sauce and takes on a thick consistency. To make traditional tonkatsu sauce, vegetables and fruits such as tomatoes, prunes, dates, apples, lemon juice, carrots, onions, and celery are boiled together with spices, vinegar, and sugar until thick. Now, that’s a lot of work. But it makes for a really flavorful sweet and savory sauce.

A simple way to replicate tonkatsu sauce is by combining ketchup, Worcestershire sauce, soy sauce, oyster sauce, and sugar together. Tonkatsu can be a lot more complicated to make compared to teriyaki sauce but it’s also worth the try.

I’m 100% sure this is the hardest to pronounce out of all the sauces in this list. Worcester or Worcestershire was created in the 19th century in Worcestershire, England. John Wheeley Lea and William Henry Perrins came up with the sauce and started the company Lea & Perrins.

These two can be hard to tell apart. Some may even say they’re completely the same. Yakiniku translates as grilled meat in Japanese. With that, Yakiniku sauce is designed more to be used as a basting sauce for grilling meat. The common ingredients found in Yakiniku sauce are soy sauce, sake, Mirin, sugar, garlic, fruit juice, and sesame seeds. Pretty close to a teriyaki sauce, right?

A difference between teriyaki and Yakiniku style cooking is that Yakiniku meat is rarely marinated. The sauce is typically applied as the meat is being grilled. The function of Yakiniku sauce is more specific than that of teriyaki sauce.

Yakitori is even more specific than Yakiniku. It’s simply the term for grilled skewered chicken in Japanese. Yakitori sauce would be your basting sauce for grilling yakitori. You can have a variety of yakitori sauce recipes but the most basic blend is soy sauce, sugar, mirin, sake. Sounds familiar? Well, that’s almost the same as traditional teriyaki sauce.

Teriyaki sauce isn’t as restricted as the yakitori sauce because you can use teriyaki sauce for more ingredients apart from chicken. Teriyaki sauce is also widely used for a number of different recipes, that isn’t exclusive to grilled meat.

Now that all the sauces similar to teriyaki sauce are now well-defined, deciding on what sauce to use will rely more on your preference in flavor and cooking style. This is more of a guide and your own taste and preference will always be number one. Happy cooking, everyone!